I think of this trip as "3 Christmas Shows in 3 days". The pictures that I will be in the general chronological-order. I went on a bus with the Seniors-On-The-Go-Tours group to Pigeon Forge. The bus left Lawrenceville about 8AM and we stopped in Dillard, GA at the Dillard House Restaurant. The food is served 'family-style' and we sat in row-tables with about 12 people to a row. The food was served hot, quickly and was excellent. Grits, Scrambled Eggs, Ham, Sausage, Bacon, Biscuits, Hash-browned potatoes. (Our tour-director has made previous reservations and they were prepared for a bus full-of-people. Just a note for the reader that I don't remember writing in any previous posts - the bus-driver always unloads the bus near the place that we are going so that we do not have to walk very far. Also, usually, our pick-up locations do not require much walking.)

The tour-director, Cathy, had considered asking the bus-driver to travel on Highway 441 between Cherokee,NC and Pigeon Forge. However, we had recently had some rain and cold weather and the highway was closed. So, we used the interstate highways for travel. When writing this post, I just looked at Google Maps for the mileage and travel-time from Atlanta to Pigeon Forge. The 441 highway has red circles with a straight-white-line in the middle. I presume that this indicates that the highway is closed again today.

We arrived at the Music Road Inn and received our room keys. (Again, Cathy has made reservations and the hotel is prepared for our arrival. Check-in is really fast this way, even with a large group.) After a short rest in the hotel, we boarded the bus and attended a popular theater called "Hatfield and McCoys" (a dinner theater). The theater play revolves around the 'feud' between the families, and for this time of year, inserts Christmas Themed events. I was truly amazed when the stage floor opened and there was a pool of water underneath. The actors then had diving events in the show and part of the show even included several dogs jumping into the water from low diving boards. I had attended the show many years ago in the summer and the pool-of-water was new from the previous show I had seen. Our meal consisted of fried chicken, mashed potatoes, string beans and chocolate pudding as dessert. All of us agreed that our meal was very good considering the quantity of food served for the show.

After breakfast in the hotel the next morning, we went to the Titanic Museum. We were greeted by an employee of the Titanic and given a "Passenger Boarding Pass". Each pass had the name of a different person who was on the ship when it sank in the Atlantic Ocean. The information about the ship told of the "classes" of people, accomodations, cost, etc. There was a room that described how far below the water the ship is located and there was information on how difficult it was to get the artifacts. The artifacts of the ship on display were amazing. Did you know that life-vests of that period had cork inside? The display of them is very interesting. There was some information about the movie "Titanic" and how realistic it was. The last exhibit in the museum was a 'wall of survivors' where you looked for your boarding-pass name and determined if that passenger survived or not. At the end of the museum tour, we were shown the elevator to the third floor where we dined "First-Class" in the special guest area. Our meal was OUTSTANDING. I HAVE to include a 'food' picture here as well as the wallpaper of what the wharf in England looked like as the ship departed for New York.

We enjoyed the matinee showing of the Country Tonight Theater. It was an entertaining show with the performers greeting everyone in the lobby afterward. Next, we saw "The Island", an eating and shopping area of Pigeon Forge. We left after the Christmas light had been turned on. There is a large ferris wheel there, but I didn't hear of anyone from our group going on a ride there. The trip was about Christmas and Cathy said that she saved the best show for the last. We went to an elaborate production at the Opry Theater. The show was wonderful with the elaborate ending including 2 live camels on-stage. (For some reason, I didn't get a picture of the last of the play.)

The final day-of-the-trip included the usual breakfast in the hotel and then a short-drive to the "Christmas Place" store. I ended up buying a couple of very unique Christmas presents, some Christmas cards and a clear-plastic with liquid, glitter, and colored-light inside Christmas tree. Next, another short-ride to the Apple Barn and Cider Mlll. More shopping and lunch at the Apple-Barn restaurant. We a delicious meal and I ate chicken-and-dumplins. For the trip back to Atlanta, Highway 441 was open and we rode there for the mountain views. We were al treated to snow and ice on the side of the road. I was thankful for the safety of a wonderful trip to see shows and a view of winter mountains. 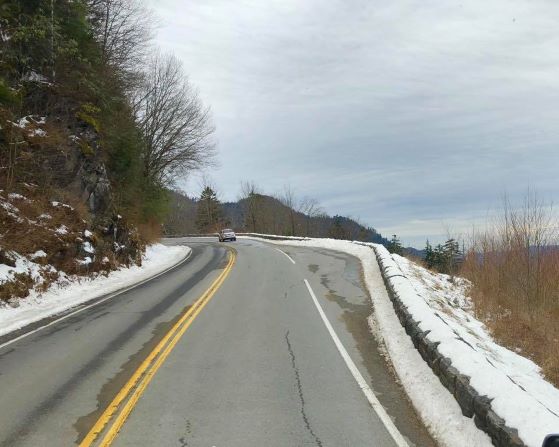